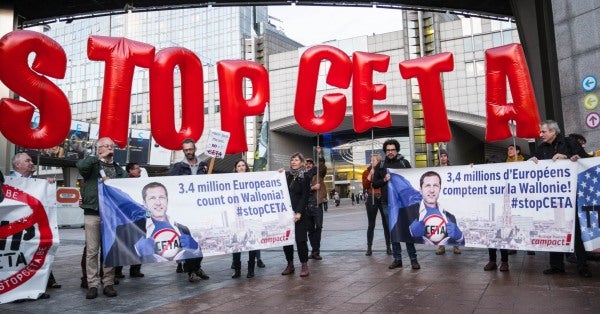 The ongoing resistance of the Belgian regional government of Wallonia to CETA highlights the pact’s most dangerous flaws, and amplifies the concerns of millions on both sides of the Atlantic.

Standing up to intense pressure, Wallonian First Minister Paul Magnette and his government have refused to support the Comprehensive Economic and Trade Agreement between Canada and the European Union. It’s a major win for opponents of this corporate-driven trade deal.

Without Wallonia’s endorsement, Belgium can’t support the deal – effectively blocking its approval at the EU level. It also means a signing ceremony between Canada and the EU, planned for later this week, is off. Belgium’s Brussels region also backs Wallonia.

The impasse is a key moment in European mass mobilizations that have drawn hundreds of thousands of demonstrators and millions of petition signatures. Last-ditch attempts to silence critics with a weak, non-binding “declaration” have failed.

The key concerns of those demonstrators, and of Wallonia’s government, are shared by CUPE and many Canadians. These concerns are highlighted in our union’s call for Canada not to ratify CETA.

It’s time for the Canadian government to recognize the fundamental flaws in CETA. What’s needed are major amendments – not “clarifications” – to fix these flaws.

CUPE is calling for Canada to reopen negotiations and improve CETA by:

The collapse of CETA is a signal that trade deals can’t be negotiated in secret, without the full participation of citizens, unions and other concerned groups.