Budget 2017 makes a multi-year funding commitment to early learning and child care, with an additional $7 billion over ten years. A portion of this funding will be for Indigenous children living on and off reserve. It is positive to see a multi-year funding commitment to child care; however, almost 70 per cent of the funding will only roll out as of 2022-2023.

This coupled with the option of boosting parental benefits to 18 months with no increase in benefits shows a government that is out of touch with the needs of working parents.

Funding commitments over 10 years in Budget 2017 (in $millions) 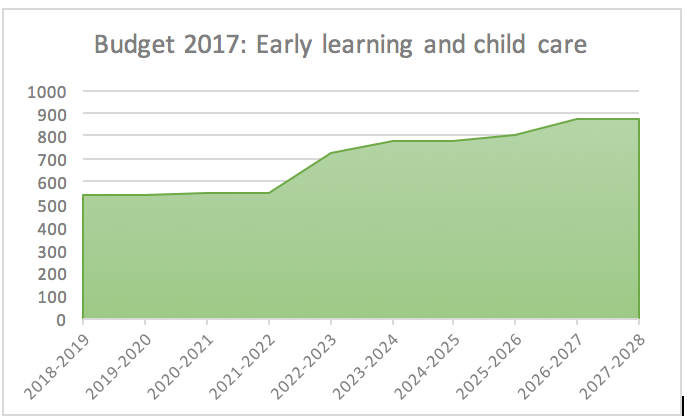 After ten years, the funding will still fall short of the internationally-recognized minimum funding benchmark of one per cent of GDP.[i] Child care advocates had called for an initial federal contribution of $600 million that would then grow by $1 billion over each of the next five years, much more than was announced in Budget 2017.

A significant portion of funding should be allocated to Indigenous governments to design, develop and deliver early childhood education that is linguistically and culturally relevant. This should be done on a nation to nation basis respecting the Truth and Reconciliation Commission calls to action and the United Nations Declaration on the Rights of Indigenous Peoples.

The need for child care

Then there’s affordability. Median infant fees range from $164 per month in Montreal where there is child care program to $1,321 in Vancouver and $1,649 in Toronto.[iii] A study for the City of Toronto found that licensed child care was unaffordable for 75% of families. Furthermore, fees are not decreasing—toddler fees rose by 8 per cent in Canada’s largest cities between 2014-2016 when the rate of inflation was 2.5 per cent.[iv]

Internationally, Canada has been a laggard on early childhood education and care. A 2008 UNICEF report showed that Canada only met one benchmark out of ten for early childhood services, tying Ireland for the worst performance.[v]

The federal government has been in discussions with provincial and territorial governments about a framework on early learning and child care. The framework is expected to be announced soon and include common principles such as quality, inclusivity, affordability, flexibility and accessibility. This framework will require regular evaluation and modifications as system building occurs.

This framework needs to recognize that every child has a right to early childhood education and care. Furthermore, the framework must ensure public funding is only directed toward public and non-profit child care. The research is clear: non-profit child care consistently receives higher quality ratings than for-profit centres.[vi] The experience of corporate child care in Australia and the UK shows that when corporations dominate, parent fees soar and governments make hefty payouts to support shareholders’ profits.[vii]

The budget references that funding will support enhanced skills training for child care workers. While this is a positive step, much more is needed to respond to the low wages and poor working conditions for this female-dominated workforce. The federal government should show leadership on workforce issues through the creation of a national strategy for the child care workforce with data and research to support this work.

Building a quality child care system for all makes economic sense. Even Finance Minister Bill Morneau’s Advisory Council on Economic Growth proposed the option of a national child care program in order to boost economic growth. It estimated that raising the women’s labour force participation rate to similar levels as the province of Quebec could add $13 billion or 0.7 per cent to the national GDP per capita.[viii]

Previous research on Quebec’s child care system estimated that access to low-fee child care resulted in nearly 70,000 more mothers entering the workforce, an increase of 3 per cent. This resulted in a 1.7 per cent or $5 billion increase in Quebec’s GDP.

Growing a child care system requires significant funding. Take Quebec as an example: they provided $2.4 billion in funding for 2011/2012. We can also compare with other parties and previous government commitments. The 2015 NDP election platform had promised an additional $1.9 billion in funding by 2018-2019 versus the $540 million included in Budget 2017. This would have reached $5 billion per year at the end of eight years. Even the previous Paul Martin Liberal government had promised $5 billion over five years for early learning and child care.

The funding levels in Budget 2017 will certainly create some child care spaces and hopefully foster affordable fees for parents. At the same time, much more is needed to ensure quality, affordable child care for all.

High-quality ECEC must be integrated with broader family policy improvements, such as enhanced parental benefits and income support for parents. With Budget 2017, parents will have the option of extending parental leave for 18 months at a lower Employment Insurance benefit level of 33 per cent. This change will only be available to a small portion of Canadian families with a high income earner. Most families already find the 55 per cent wage replacement difficult to manage financially.

CUPE and many other unions had called on the federal government to:

·        expand access to maternity and parental through a lower eligibility threshold,

·        establish a floor for special benefits that is not below full-time minimum wage, and

[vii] CUPE, The pursuit of profit in child care: Risky business for parents and government: A CUPE backgrounder, March 2012.