Fredericton – This Monday, CUPE officially launches a campaign named “Who Cares?” to get government and the public to talk about community care services (CCS). CUPE is advocating that services such as group homes, special care homes, transition houses and home care should be integrated under public administration. 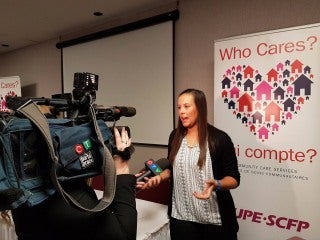 “Users and workers in the sector need an organized and structured system. It makes no sense that government maintains a hands-off approach in such essential care services,” said Julie Doucet, one of CUPE’s spokesperson for the campaign.

The level of fragmentation in the community care sector remains at an all-time high. On the provincial level, K-12 Education has seven administrative units, Healthcare has two. Currently, there are more than 650 administrative units in the CCS sector alone. The absence of a centralized system, combined with worrying demographic trends, spells major trouble for policy makers and the general public.

“If we are to spend money on community care, let’s make sure it is spent wisely with a transparent administration. At the moment, the 10 000 workers in this sector, mainly women, are earning less than $13 an hour, but there are no real standards of work because of the fragmented system,” said Doucet.

“While many of the CCS providers are already funded through Social Development, there is no public management or oversight of the sector. Government is throwing money at these providers in a complete lack of structure,” said Luc LeBlanc, CUPE Research Representative. “This means waste through inefficiency and no real power for government to ensure successful implementation of any care strategy, such as those to reduce pressure on our hospitals through better home care,” added LeBlanc.

Auditor General Kim MacPherson had recommended in her June Report that government still needed to develop a comprehensive long-term plan for our aging population. She had said that it should include a multi-faceted solution involving nursing homes, other long-term care facilities, in-home care, family support to serve New Brunswick seniors.

You can learn more about the campaign at www.facebook.com/WhoCaresQuiCompte