This year we celebrated successes in our ongoing work to close the gender wage gap.

CUPE 2745, representing 4,400 New Brunswick school board workers in female-dominated jobs, made a pay equity breakthrough when a joint job evaluation process identified a substantial gap between bargaining unit jobs and their male comparators in the New Brunswick public service. The job class benefitting the most is education assistants, who make up about three quarters of the bargaining unit. The pay equity agreement will go to the province’s Board of Management, which represents the employer in the next steps. 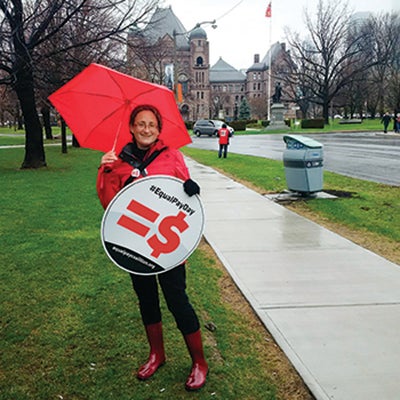 In Ottawa, CUPE 503 won a long pay equity fight for the city’s 700 library workers. The local successfully argued that library workers in female-dominated jobs had received lower wage increases than members working directly for the city. Library workers covered by the award will get a pay increase and retroactive pay back to 2005.

Other 2015 pay equity progress in Ontario includes a settlement for members of CUPE 3137 working at the Essex County Association for Community Living, with retroactive pay back to 2010.

We celebrated successes in our ongoing work to close the gender wage gap.

In Quebec, CUPE was in court in October to defend our successful constitutional challenge of changes to the Pay Equity Act, which the province is appealing.