As meetings with the leaders of Canada, the United States and Mexico got underway in Ottawa, social movements and progressive elected officials were mobilizing to fight the Trans-Pacific Partnership trade agreement.

More than forty people, including seven New Democratic members of parliament and CUPE representatives, came together in a meeting hosted by NDP trade critic Tracey Ramsey. 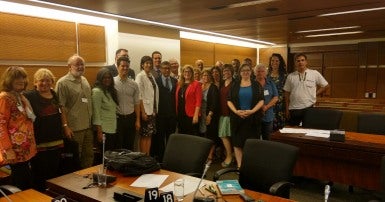 The MPs heard from Victor Suarez, a former member of the Mexican house of representatives and a member of the group Mexico Better Off Without the TPP, as well as Arthur Stamoulis from the U.S.-based Citizens Trade Campaign.

Suarez outlined NAFTA’s devastating impact on Mexican workers and the country’s economy, as well as the rise of human rights violations.

Stamoulis highlighted the growing opposition to the TPP, especially among working people in the United States.

Canadian Labour Congress economist Angella MacEwan spoke on behalf of the Trade Justice Network, and emphasized that the TPP has little to do with trade, as 97 per cent of our trade with TPP countries is already tariff-free. Instead, the TPP is an anti-democratic deal that will create new rights and powers for corporations.

Labour’s opposition to the TPP was clear at the meeting, which also included representatives from the Public Service Alliance of Canada, the National Union of Public and General Employees, the United Steelworkers, and Unifor.

The mobilization continued at a noon-hour community meeting that drew a large crowd. Ramsey told community members the Canadian fight to stop the TPP is just beginning. More than 15,000 groups or individuals have made submissions to the House of Commons committee studying the pact, and Ramsey urged people to speak up against the TPP.

TransCanada Corporation’s NAFTA challenge of the US government’s decision not to proceed with the Keystone pipeline highlights the problems with investor-state dispute settlement rules in both NAFTA and the TPP, said Stamoulis.

Suarez said every one of the 43 trade deals that have been pitched at Mexico have become a mobilizing opportunity, and have brought continental movements closer together – even in the face of growing violence and repression, and widespread human rights violations. The TPP will only widen Mexico’s wealth gap, he said. A major consequence of free trade has been growing food insecurity, leading to massive poverty for small-scale farmers, and waves of migration.

CUPE helped bring Suarez and Stamoulis to Canada as part of ongoing anti-TPP work coordinated with Common Frontiers, the Trade Justice Network, the Council of Canadians and the Réseau Québécois sur l’intégration continentale. CUPE is a member of the TJN and Common Frontiers.