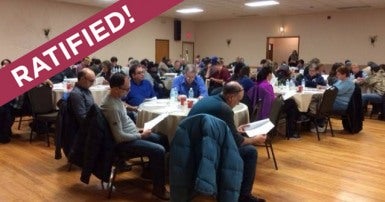 250 education workers with the Conseil scolaire de district catholique de l’Est ontarien (CSDCEO) will be back on the job Tuesday after ratifying a tentative agreement that was reached on the weekend. The workers commenced strike action on February 7th after going two and a half years without a contract.

“We’re pleased to get back to doing the jobs we love, keeping schools clean and safe and functioning normally for students,” said Raymond Giroux, president of CUPE Local 4155. “We go back to work having achieved what we needed to through the strike: we now have a fair and equitable deal.”

“We’d like to thank the community for all the support they showed us during the strike. People were very generous and understanding” Giroux added.

“Our members were also outstanding during the labour dispute. On the picket line, we had the opportunity to talk face-to-face with students’ parents. It was our chance to explain to them that the strike issues had a direct effect on their children’s experience in school. Members were greatly encouraged by the support from parents.”