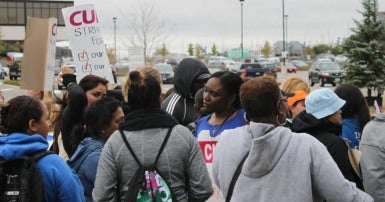 The union representing 435 striking front line, administrative and support workers today called on local politicians to start asking ‘hard questions’ about why the Children’s Aid Society of the Region of Peel (Peel CAS) is spending outrageous amounts of money to recruit strike breakers.

“For an agency claiming it can’t afford to negotiate improvements to workload language to then turn around and offer more than double the wages, accommodations, meal allowances and ‘incidental expenses’ is simply beyond comprehension,” said Sonia Yung, President of CUPE 4914.

“Our members earn less than half the hourly wage Peel CAS is offering scab workers,” said Yung, adding that CUPE 4914 certainly don’t expect Peel CAS to cover the cost of their transportation, housing, wireless, meals, and give them $50 in walking-around money. That’s what Peel CAS is offering to scabs, then claiming poverty when we say we need to spend a little more time with each client.”

CUPE 4914 went on strike on September 18 after rejecting what Peel CAS negotiators characterized as its ‘final offer.’

“If you’re a provincial politician, I think you need to be asking if paying scab labour outrageous sums is the best use of provincial tax dollars. If you are a municipal or regional councillor or a member of parliament, ask if your constituents are getting the quality of care they should be getting,” said Yung.