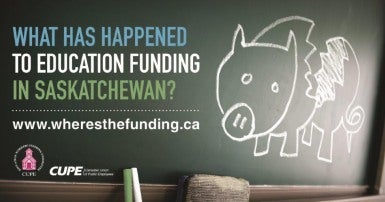 CUPE has launched a province-wide campaign to raise awareness of the funding challenges in K-12 education.

The campaign is called “Where’s the funding?” and features billboards, a website, and a postcard campaign.

“Investing in our children is investing in the future of Saskatchewan. But the current trends in education funding paint a troubling picture of our government’s priorities,” said Jackie Christianson, chairperson of CUPE Saskatchewan’s Education Workers’ Steering Committee. “Most school divisions are experiencing budget shortfalls, and it is our children who are feeling the impact.”

The provincial government is also doing more to hamper school boards than to help. Earlier this year the government made the unprecedented announcement that school boards would be on the hook for half of the 18 million dollar wage increase the Ministry of Education signed with teachers. School divisions were told they would have to “find savings.”

Recently, the Workers’ Compensation Board made the decision to give rebates to all employers in the province who pay into the fund. The Government of Saskatchewan responded by clawing back those funds from the provincial operating grants of every school division, even though private schools were able to keep their rebate.

The provincial government has also been musing about school board mergers and restructuring, which is creating uncertainty for parents, staff, and school boards.

“Our government must invest adequate funding in education to allow school divisions access to the required resources, ensuring all Saskatchewan children’s rights to a quality, safe, and healthy education,” added Christianson.