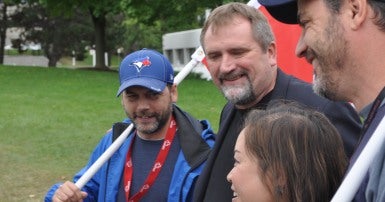 Mark Hancock, National President of the Canadian Union of Public Employees (CUPE), today brought the support of CUPE members across the country to striking frontline, administrative and support staff at the Children’s Aid Society of the Region of Peel (Peel CAS).

“You are not alone,” Hancock told striking members of CUPE Local 4914, who have been on strike against Peel CAS since September 18 for more than a week.

“Your struggle is supported by more than 639,000 CUPE members from coast to coast, and I come today to share their support and solidarity with you,” he added.

CUPE 4914 began strike action on September 18, after Peel CAS presented what it characterized as its ‘final offer’ to the union’s bargaining committee.

That offer failed to address key concerns raised by CUPE 4914 regarding workloads and health and safety in the workplace.

“I understand from my conversations with the Local President that Peel CAS has publicly expressed its willingness to resume bargaining. It would be helpful if they conveyed that sentiment to the union, which I’m told they haven’t,” said Hancock.

Sonia Yung, President of CUPE 4914, said her bargaining committee has remained on standby and is ready to resume bargaining on short notice.

“I was surprised to hear (Peel CAS Chief Administrative Officer) Rav Bains say they want to resume bargaining, since he hasn’t bothered to contact me. I want to assure residents of Peel Region that we have been, and continue to be, ready to bargain,” said Yung.

Hancock also presented a cheque in the amount of $5,000 to assist CUPE 4914 members during the strike.

“We will continue to support you with the resources you need for the duration of your struggle,” he said.