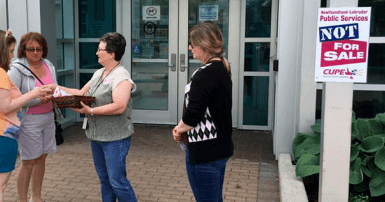 Provincial library workers in Newfoundland and Labrador are on a mission to save public libraries. On June 22, CUPE members in Corner Brook, Stephenville, Grand Falls-Windsor, St. John’s, Mount Pearl and Labrador City took to the streets outside libraries to talk to the public about what’s at stake for their communities.

These events were an opportunity for library patrons and members of the public to learn more about the drastic cuts being proposed by the provincial government. Library workers handed out buttons and stickers during their lunchtime information pickets. 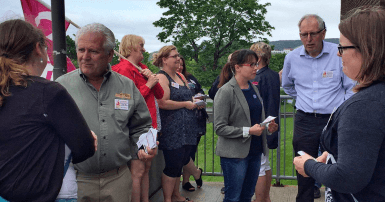 The cost of keeping the 54 libraries open is under $1 million – less than former Nalcor CEO Ed Martin’s severance package of $1.4 million from the province.

“Speak out. Contact Dale Kirby, contact your local representative, let them know you don’t agree with these cuts.”