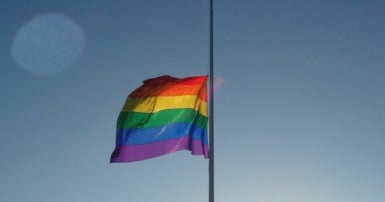 Following the shocking massacre of 50 people at the Pulse nightclub in Orlando, Florida, by a lone gunman on June 12, who also injured 53 more people that day, Mark Hancock, national president of CUPE, is speaking out on behalf of CUPE members to condemn violence in all its forms.

“Our thoughts and condolences go out to the family and friends of those killed and injured,” said Hancock. “There are no words to express the depth of our sadness and shock at this horrific expression of hate and tragic taking of life, in what was supposed to be a celebration of pride and love in the LGBTTI community.”

While there have been reports the attacker had ties to terrorist groups, and was motivated by homophobia to disrupt pride celebrations, whatever the motivation, hate is the root cause of such violence and it must be stamped out in all its manifestations.

CUPE stands in solidarity with our LGBTTI members and communities in Canada and around the globe, and all our members, to fight hate and oppression that leads to violence and stifles humanity.

“We condemn this shocking attack and extreme violence, and whatever hatred motivated the killer,” said Charles Fleury, national secretary-treasurer of CUPE. “We will continue our union’s work to fight hate, oppression and discrimination in all its forms, and stand together to promote a world where love conquers hate, and hope conquers fear.”