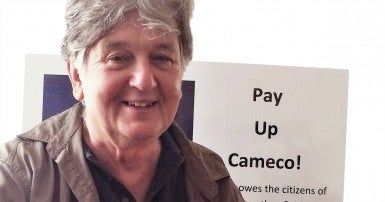 Former CUPE member and longtime community activist Don Kossick is well known in Saskatchewan as a tireless organizer for social and economic justice. Now he’s making bigger waves nationally and internationally with a campaign to get Cameco, the world’s largest publicly traded processor of uranium, to pay its fair share of taxes.

“Many people do not realize the billions that have been siphoned out of Canada that could go to health, education, human services, local development, etc. The response to our billboard campaigns and the petition signed by thousands show people want the Camecos of Canada to pay back what is owed,” said Kossick.

Last year Kossick, who also established a chapter of Canadians for Tax Fairness in Saskatchewan, raised money to erect a billboard in downtown Saskatoon headlined “Pay up Cameco”. This brought attention to the fact that Cameco, which was formed in 1988 by the merger and privatization of two crown corporations, was using subsidiaries in Switzerland to evade billions in taxes.

This year Kossick started a petition demanding Cameco pay its taxes; it garnered over 36,000 signatures. The Canada Revenue Agency is finally taking Cameco to court this September, aiming to recover $2.1 billion in taxes plus interest and penalties, which would be Canada’s largest tax evasion case.

Whether the CRA eventually wins or loses, this campaign for tax justice has already had a big impact, mainly by publicizing how certain large corporations avoid paying tax, how much it costs in lower revenues for public services, and by pressuring governments to make changes—and how activists like Don Kossick can make a big difference!