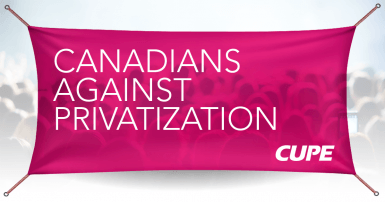 While the Finance Minister and his unrepresentative corporate elite advisory team make plans to sell off good public Canadian infrastructure to the highest bidder, voices from across the country are sounding the alarm in a major way. Check out what financial experts, academics, MPs from across party lines and members from industry are saying about the backwards logic of cannibalizing our public infrastructure:

“The Advisory Council argue and assume that an arm’s length investment bank seeking returns will be better than governments at selecting productive projects and completing them at low cost. But history is replete with examples of botched public-private projects which left governments on the hook for high costs and for losses, and public agencies do have the capacity to make good decisions. […] Massive privatization of public infrastructure would be a major step in wrong direction and should be rejected by Minister Morneau.”

“I fail to understand why private investors like BlackRock would invest in infrastructure projects unless they could make a profit, and even an infrastructure bank seems like a means of ensuring … that that investment money will be making a profit on the backs of Canadians. It almost seems like a massive transfer of public funds toward the private funds in order for them to make money – a subsidy towards business.”

“There’s still time for Finance Minister Morneau to walk back some of the McKinsey think, and define instead a more encompassing, holistic Centre for Canadian Infrastructure Excellence. A centre that will not speak first to corporate interests and return on investment, but equally to the needs of one Canada.”

“The problem with privatization is that it usually ends up costing consumers more. Various auditors general around the world, including Ontario’s, have made that point when examining public-private partnerships. The report seems to acknowledge this when it notes that the federal infrastructure development bank it wants set up may have to suffer “below-market” returns for a while in order to assure a steady profit stream to its private-sector partners.”

“I’m trying to see how this privatization, or this move, will actually be to the benefit of the country. Especially since most of the risk will be assumed by the federal government. We never had this debate in this country. I don’t recall the word privatization being said during the electoral campaign and now this is the direction we’re going towards.”

“While the possibility of a one-time, short-term cash injection appeals to the federal government, the long-term result is not in the best interest of Canadians because of the increased costs to passengers and the decrease in Canadian competitiveness.”