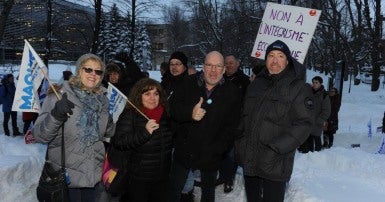 Representatives of the university sector provincial council (CPSU) of the Canadian Union of Public Employees (CUPE) recently supported students and workers at the Université de Montréal when they rallied outside the offices of HEC Montréal where Finance Minister Carlos Leitão was scheduled to hold a pre-budget consultation. His participation in the event held at HEC Montréal was cancelled at the last minute for unknown reasons.

The rally was organized to protest cuts made by the Government of Quebec to education, particularly in the university sector. These austerity measures have had major impact on the quality of services offered to students.

A number of services have even been eliminated, among them the botanical library and the optometry library. Cutbacks to course offerings have forced many students to stay in school longer in order to complete certain mandatory courses. Class sizes have also been creeping upward, and foreign students have been hit with tuition hikes.

“It’s been five years since the Maple Spring, and universities are continuing to face cuts,” stated Marc Ranger, director of CUPE Quebec. “The government promised to put a billion dollars into our universities, but all of the money has gone into real estate and none of it into education!”

The CPSU conducted a survey in 2016 on working conditions among support staff at universities across Quebec. A majority of the respondents reported seeing a decline in student services among other issues. More than half had seen a deterioration in building cleanliness. And a very strong majority reported a deteriorating work environment and higher workloads.

“The Finance minister’s austerity measures are coming at a high cost in terms of their impact on the future of our younger citizens,” said CPSU Vice-Chair Marie-Paule Morin. “But in addition to the students, they’re affecting us, the support workers, who have been hung out to dry while senior management votes itself scandalous pay raises.”