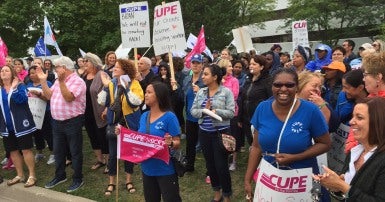 Dark clouds couldn’t put a damper on the spirits of striking frontline, administrative and support workers from the Children’s Aid Society of the Region of Peel (Peel CAS).

The strikers, members of Local 4914 of the Canadian Union of Public Employees (CUPE 4914), were joined today by a contingent of social services workers from across Ontario, as well as the president and secretary-treasurer of CUPE Ontario.

“The support we are receiving from our CUPE sisters and brothers across the country is just overwhelming,” said Sonia Yung, president of CUPE 4914.

“When people hear that we are facing an employer who is refusing to even consider capping caseloads, refusing to adopt health and safety best practices developed by children’s aid societies across Ontario, their first reaction is shock, followed by ‘what can I do to help you?’” she added.

The strikers’ picket lines were bolstered by community allies, as well as members of the Peel District CUPE Council, and a contingent from CUPE Ontario’s Social Services Workers’ Coordinating Committee (SSWCC).

“No CUPE member stands alone. When a local union faces a struggle like CUPE 4914 is facing, they have the support of more than 600,000 CUPE members across Canada. If Peel CAS didn’t know that before, they certainly know it now,” said Fred Hahn, president of CUPE Ontario.

“In times like these, CUPE members stand together and provide the moral and material support needed to ensure better, safer workplaces and quality public services for all,” said Candace Rennick, secretary-treasurer of CUPE Ontario, who presented CUPE 4914 with a cheque for $5,000.