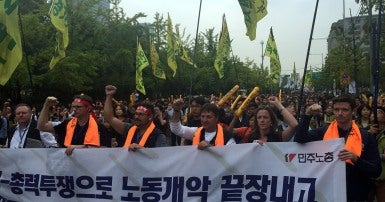 Mass mobilizations in South Korea in 2015, in response to right wing labour reforms, led to serious attacks on trade union rights, freedom of peaceful assembly and association. CUPE responded with messages of solidarity for our trade union sisters and brothers and we condemned the Korean government for conducting raids on several union offices and arresting and detaining important labour leaders and workers at that time.

The historic public sector mobilization this week in opposition to the imposition of performance-related pay and in defence of collective bargaining and trade union rights was an opportunity for CUPE to show our solidarity in action. Tens of thousands of workers, across the public sector walked off the job on September 26 and CUPE stood with them in the streets of Seoul. “The South Korean government attacks on trade unions, the public sector and the right to demonstrate are totally unacceptable. It is important for CUPE to be in South Korea and express our members’ solidarity with the South Korean public sector workers. Their fight for public services and democracy deserves our full support,” said CUPE National Secretary Treasurer Charles Fleury.

“We were shocked when the Korean government and employers labelled the peaceful and lawful strike illegal for railway workers, and suspended over 800 subway members and union leaders from their job positions rather than listening to their voices.” This despite the fact that several court decisions have found that orders to suspend striking workers from their job positions in 2006, 2009 and 2013 were unlawful. This was an unacceptable denial of workers’ rights.

The international delegation spoke against the government and employer practice of refusing workers’ proposals to collectively bargain, while using the excuse of maintaining normal services to bring in inexperienced strike-breakers in the rail and subways causing grave dangers to public safety. These practices are certainly not unique to South Korea, CUPE is speaking out against this same practice in Canada.

“While in Korea, we conducted various meetings and public dialogues to share experiences from United Kingdom, France, Australia, New Zealand and Canada about performance related pay, and send a clear message to government officials that this will bring great harm to workers and ordinary community members who depend on public services,” said Fleury.

“We were humbled and inspired when we visited two imprisoned leaders, KCTU President Han Sang-Gyun and KPTU Vice President Cho Sung-Duk, in the Seoul Detention Center. These leaders continue to lead a courageous and legitimate struggle to defend the interests of workers,”.

CUPE, along with trade unionists around the world, echo the call of our sisters and brothers in South Korea. The South Korean government must stop the unilateral enforcement of the individual performance-related pay and termination system. Guarantee workers’ rights to collective bargaining and collective action and reinstate all workers suspended from their jobs and they must release all imprisoned workers.

In the global struggle against neoliberal, anti-worker attacks, the delegation committed to continuing efforts to build international solidarity with our sister and brothers on the front line in South Korea.