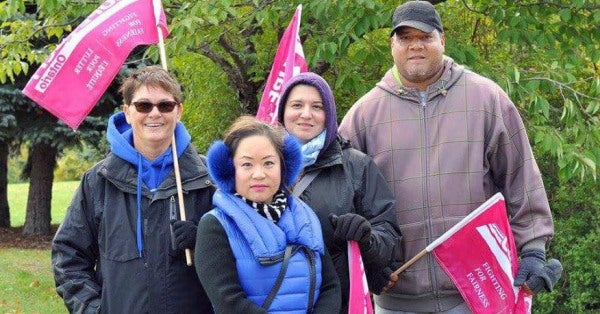 Members of the union representing 435 striking front-line, administrative and support staff at Children’s Aid Society of the Region of Peel (Peel CAS) have overwhelmingly rejected a motion to even consider voting on a final offer sent directly to members by their employer.

The motion to consider the offer was presented by a member of Local 4914 of the Canadian Union of Public Employees (CUPE 4914) at a general membership meeting. This followed Peel CAS Chief Executive Officer Rav Bains’ efforts to circumvent the union and the bargaining process by contacting members directly.

325 members turned out to the meeting, with over 95 per cent voting against the motion.

“Our members have overwhelmingly rejected Rav Bains’ offer and his tactics,” said CUPE 4914 President Sonia Yung following the meeting. “We have been consistently asking to get back to the table and Rav has shown that he has no interest in negotiating because he thought he could step around the union, break union solidarity, and send the offer directly to the members. But our members remained united and sent a message that the time has come to get back to the table and negotiate sincerely in order to end this strike for our members and the families that rely on our services.”

Though the members of CUPE 4914 did not vote directly on the specifics of the offer, they all had an opportunity to read it when Peel CAS mailed a copy directly to each of the 435 members. The vote against even considering the offer was overwhelming and is being considered a vote against the offer itself.

Earlier in the week, the union had requested the two sides settle the remaining strike issues through binding arbitration. This request was denied by Peel CAS, extending the strike into its ninth week.