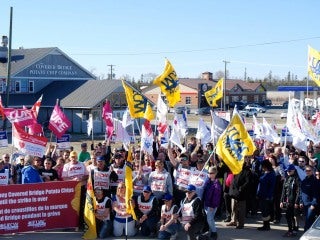 We encourage all CUPE members to show their support for this boycott and to send a message to the owners of Aldi to stop contracting with Covered Bridge Potato Chips until the workers have a fair deal in place.

“We are proud to stand here in solidarity with these workers who are fighting for fairness, a living wage, and job security,” said CUPE National President Mark Hancock.

Instead of negotiating a fair collective agreement, Covered Bridge Chips filed an unsuccessful application with the Labour Board to terminate the union. United Food and Commercial Workers Local 1288P, which represents the striking workers, is asking for supporters to take the chips off of their shopping list until the strike is settled, and to help spread the word.

Hartland, NB –  UFCW Canada Local 1288P, the union representing striking members at Covered Bridge Potato Chips in Hartland, New Brunswick, and UFCW Canada’s National Office are calling on activists to support the next phase in the Covered Bridge workers’ struggle for fairness and respect. Last winter, the Covered Bridge members were forced out on strike because – for the past two years – the owners of Covered Bridge have said “NO” to paying their workers a fair living wage and recognizing basic workplace rights.

So we are asking for your help to get the company back to the bargaining table to negotiate a fair first contract.

Help get Covered Bridge back to the negotiating table by sending a message to Aldi, the major U.S. retailer that contracts Covered Bridge to produce its SimplyNature potato chips.