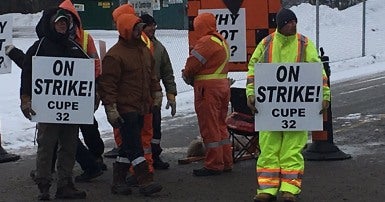 The 185 members of CUPE 32 who provide roads maintenance, including snow removal, water and wastewater services, arena maintenance, cemetery services, parks and pools maintenance and mechanical services for the City of Cambridge commenced strike action this morning at 12:30 a.m. after negotiations with the city broke down.

“We are very disappointed with how things have gone and we urge the city to get back to the table soon as possible before this thing drags on,” said Ray Burigana, President of CUPE 32.

The City of Cambridge has already brought in replacement workers to continue snow plowing and water services. “Our members want to get back to work and continue providing quality services to the residents of Cambridge,” Burigana said, “I’d suggest that the city stop spending money to get other people to do our jobs and negotiate a fair contract so that we can resume all services.”

With many issues still outstanding between the two parties, the only way the union believes that this strike can be resolved is at the negotiating table. “It all comes down to fairness,” Burigana continued, “the city has been very aggressive and forced this strike because they are not prepared to settle. Meanwhile, many of our members have fallen way behind people who do the same work in other cities nearby; eventually, we had to say enough is enough.”

CUPE 32 remains ready to return to the bargaining table at any time.