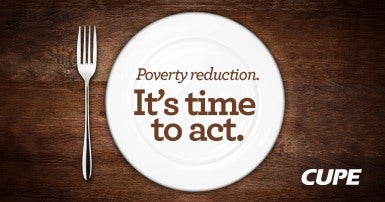 On the International Day for the Eradication of Poverty, CUPE is calling on the federal government to implement a robust poverty reduction strategy to ensure that no one is left behind.

A year ago poverty reduction advocates welcomed the new Prime Minister’s commitment to create and implement a national poverty reduction strategy. Yet today, the fact remains 1 in 10 Canadians are still struggling to access the basic necessities of life which many Canadians take for granted, such as food, shelter, and clothing. “There is no reason for anyone to be left behind in a country as wealthy as Canada. It is time for the government to take action on their commitment to reducing poverty and inequality,” said Mark Hancock, CUPE National President. “We are pleased today to put forth our recommendations on how the government can make this happen.”

CUPE’s recommendations highlight the need for a plan that has concrete goals, measurable targets and a clear timeline. Programs to assist the vulnerable such as childcare, healthcare and post-secondary education should be expanded and should remain publicly-funded. “A step toward reducing poverty in Canada would involve the creation of a universal, public and non-profit, high quality, affordable childcare program,” said Charles Fleury, CUPE National Secretary-Treasurer.

CUPE believes that eliminating poverty and reducing inequality should be a priority in building a more prosperous, equitable and sustainable country. We look forward to working with the federal government to implement a robust, concrete anti-poverty strategy that will make an enormous difference in the lives of millions of Canadians.

CUPE submission to the House of Commons on poverty reduction
Share: