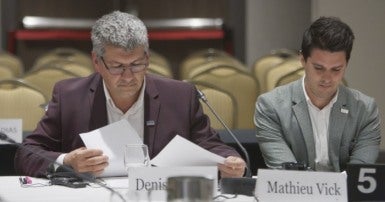 In a presentation to the House of Commons Standing Committee on International Trade, CUPE-Québec urged the federal government not to ratify the Trans-Pacific Partnership (TPP) agreement, negotiated by the Harper government.

“We acknowledge that international trade is vital. But when you consider that trade between Canada and the TPP countries is already 97 per cent tariff free, it becomes obvious this agreement is actually aimed at strengthening the powers and profits of the largest corporations, to the detriment of citizens,” said Denis Bolduc, CUPE-Québec General Secretary.

The TPP gives foreign multinationals the right to challenge or even overturn public policies adopted by democratically-elected governments. Take the case of the US company Ethyl Corporation.

“Under NAFTA, Ethyl forced the Canadian government to repeal a law prohibiting the addition of the toxic additive MMT to fuel, and to pay the corporation $13 million in compensation,” said Bolduc.

A threat to public services

The TPP threatens public services in a number of ways. The worrying aspects of the TPP include the “ratchet effect”, which prevents any reversal after a service has been privatized or a standard has been eliminated, even if the result is catastrophic.

“Shouldn’t a government have the ability to regulate an industry in order to protect the health of its citizens and to meet its greenhouse gas reduction targets? The answer is obvious,” concluded Bolduc.

Notes for a presentation to the House of Commons Committee on International Trade hearings into the Trans-Pacific Partnership
Share: