The face and composition of Canadian unions, including CUPE, have undergone major changes in recent decades and will continue to do so in the coming decade.

• In 1990, 60 per cent of Canadian union members were male and were still a majority as recently as a decade ago. Today, 53 per cent are female and if recent trends continue that number will reach 60 per cent by 2030.

• Unionization rates have dropped most for younger men and men  in general. They’ve stayed relatively stable for women overall, with the  rate decline for younger women  being offset by a rise for older women.

• Figures aren’t available on the number of racialized or Aboriginal union members, but they are likely increasing their overall share.

• Twenty years ago, there were more union members working in manufacturing than any other sector.  Now manufacturing ranks as the fourth largest sector, well below union members in education who account for double their numbers and members in health care and social services who are almost three times more numerous. 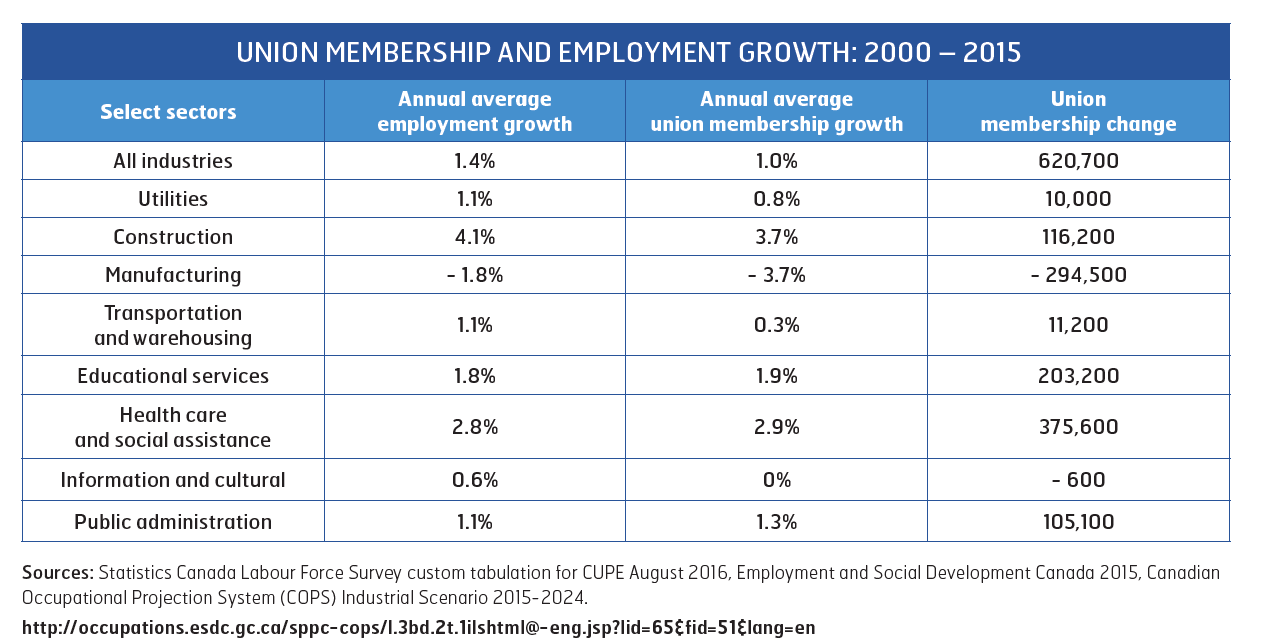 Union membership in Canada has continued to grow, reaching an estimated 4.3 million in 2015, and up by 620,000 from fifteen years ago. However, growth has slowed considerably from annual increases of two per cent in the early 2000s down to an average of 0.7 per cent in the past decade.

CUPE is by far the largest union in Canada with over 639,000 members, representing one of every seven union members. The next largest is NUPGE with 360,000 members and Unifor with 300,000 members.

Unionization rates vary radically by sector. They’re far higher across the broader public sector, whose rate has grown from 70 per cent in 2000 to 72 per cent today. Rates are actually higher now across the public administration, education, health and social services sectors. These three sectors were responsible for the overall growth since 2000, as employment in education and health grew at a faster rate than the overall average rate.

Meanwhile unionization rates among private sector workers have declined from over 18 per cent in 2000 to 15 per cent in 2015 — representing a total loss of 24,000 members. The biggest loss has been in the manufacturing sector, where there are now 300,000 fewer unionized workers than there were 15 years ago. Growth in other private sector industries has almost compensated for these substantial losses, led by construction with 116,000 new members and business, building and other support services with an increase of 54,000 new members.

The business, building and other support services (including administrative services, cleaning, waste collection and other contractual services) is the only private sector industry where unionization rates have increased since 2000. With its membership doubling over the past 15 years, it has the strongest membership growth of all sectors. Though the sector experienced high rates of employment growth with increased contracting out, higher rates of unionization demonstrate what can be achieved with targeted campaigns for janitors and cleaners.

Overall, employment growth is expected to slow in the future, from an annual average of 1.1 per cent in the past decade to 0.8 per cent in the next decade, according to the federal government’s Canadian Occupational Projection System (COPS). These projections could be optimistic. A recent study estimated that 42 per cent of Canada’s workforce is at a high risk of being affected by automation in the next decade or two. Many of these are lower paid private sector occupations, but certainly not all of them.

Much of the projected growth in employment will be in the highly unionized sectors of the economy. But the shift to more precarious, contract and temporary forms of employment across all sectors will make it difficult to achieve decent rates of growth in union membership.