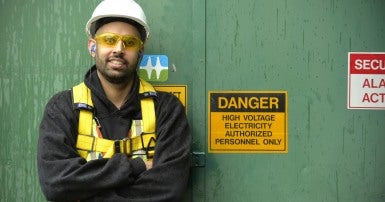 “It’s our duty to represent temporary and precarious workers,” says Aman Cheema on why he became involved with his local union and provincial division. Cheema wanted to make his working environment and community a safer and better place. As a young worker and member of CUPE 402 (City of Surrey, BC) Cheema works every day to make that vision a reality.

“We just got a couple of new hires that started on graveyard a little while ago, and I know for a fact that they don’t want to speak up on certain issues. They don’t feel safe, because they’re not full time. I think that’s it’s my duty, and any full-timer’s duty, to speak up for them.”

Part of giving young people the confidence to speak out is to help them understand their rights before they’re even in the workforce. That’s why Cheema has been active in the B.C. Federation of Labour’s Alive after 5 campaign, which gives presentations in local high schools across the province to tell students about occupational health and safety laws, the three fundamental rights of all workers, and worker rights under the workers compensation act.

“When we go into classrooms we first explain to them what a union is, do you know who we are, and we try to tell them that the teachers are part of the union, try to give them more of a positive look” says Cheema.

During his presentation, Cheema tries to connect his audience to the issue. “That’s one of you in this classroom that doesn’t get to go home to your families” Cheema explains to students when he talks about workplace injury and incident statistics about new and young workers. “When you relate it to them, it resonates with them” says Cheema.

“I wish I knew that I could refuse unsafe work and that I had the right to know that even if you refuse the work you can’t get punished for it. There’s nothing that can happen to you and it’s actually against the law for you to get in trouble.”

At just 31 years old, Cheema is the recording secretary of his local and a member of a few committees with CUPE BC. “I would not be here if it wasn’t for my local, my executive, my president, and CUPE BC” says Cheema. He’s talking about the support he’s had in becoming a young health and safety and union activist.

With this support, and the knowledge, skills, and abilities he’s learned along the way, Cheema is able to be a resource for new and young workers within his local. And with a bright future ahead of him, there’s sure to be lots more in store.

Check out these health and safety resources: