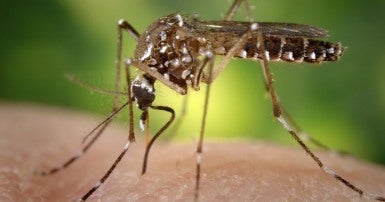 Recently, a new disease known as Zika virus disease (Zika) has gained world-wide attention. First diagnosed in the 1950’s in Central Africa, it has recently made headlines with significant outbreaks in South American, Central America, and Caribbean Nations. Having been completely unseen in the western hemisphere, there has been little to no exposure to the virus by the general population, leading to low immunity and a high rate of infection.

For an up-to-date map of the currently infected areas of North and South America please see: http://www.paho.org/

The most common symptoms of Zika include fever, rash, joint pain, and conjunctivitis (red eyes) with symptoms typically beginning a few days after being infected, and lasting up to seven days.  However, the Centres for Disease Control and Prevention (CDC)1 reports that only about 1 in 5 people infected with Zika will actually show symptoms of illness, and the majority of those will show only minor symptoms.

The major concern with Zika infecton is the potential effect on the unborn child of an infected pregnant woman.  While it has yet to be definitively proven, there is strong evidence that Zika may negatively affect the development of the fetus, potentially leading to a birth defect of the brain called microcephaly.

Additionally, some countries are reporting an increase in Guillain Barré Syndrome, a rare, and sometimes paralyzing condition.  As the data is limited, it is not clear if the increase is actually occurring, and if so, if it is linked to Zika.

Zika is spread primarily through the bite of an infected Aedes species of mosquito.  While the World Health Organization (WHO) has reported that sexual transmission is possible, no other transmission routes are considered to be significant.

A small number of confirmed cases have been brought back to Canada2 by people who have traveled to the infected regions. However, Zika is not expected to be transmitted by mosquitos in Canada, as the climate does not allow for Aedes mosquito to thrive in the northern, colder climate.

It is currently believed that there is very little potential for an outbreak caused by mosquitos in Canada3, and there have been no reports of transmission happening within Canada.

There is no vaccine or medication that protects against Zika virus infection.  For people that are traveling to areas of the world where cases have been reported, the Public Health Agency of Canada (PHAC) recommends the following precautions2:

For most CUPE members, the risk of Zika transmission is very low. Aedes mosquito can only survive in tropical climates so outdoor workers in Canada are unlikely to encounter a mosquito that could transmit the disease.  However, CUPE members that must travel as part of their job, such as flight attendants, may be put at risk if they travel to a country where there is an active outbreak.

CUPE is recommending that members of the health and safety committees work with their employer to ensure that workers who are pregnant are provided with protective reassignment.  This could be a change to the travel destination, or being removed from flight duties without loss of pay where accommodations are not possible.

For workers that do travel to regions where outbreaks have occurred, CUPE recommends that the local work with their employer to ensure all workers are educated about prevention measures and the procedures for members who may get sick, including:

In addition, employers should provide personal protective equipment, including a mutually agreed upon (by the local and the employer) insect repellent to be applied before they disembark.  Employers should also ensure that provided accommodations can be made safe from mosquito bites including screened-in or air-conditioned rooms, or additional mosquito nets around the bed.
Photo: Aedes aegypti mosquito by Sanofi Pasteur is licensed under CC BY–NC–ND 2.0.